NOTE: This is a fan-made game created in accordance to Cover Corp's Fan-Work Guidelines.

Offline version of the game is also available to download. It tends to run smoother than the browser version above since everything is already downloaded. Scroll to the bottom of the page to download. Note that you can always transfer your save data between the two versions (see Save Data Transfer below).

To prevent the awakening of the Demon Lord, the MC accompanied by these four embarked on a very absurd adventure.

This is a story-driven game. The battles are easy so there is no need to level-grind.

While it is possible to control with a mouse, the keyboard is recommended.

To transfer save data from the browser version to the download version:

To transfer save data from the download version to the browser version:

This game took over 10 months to make, so there are likely mistakes that I did not catch. Please reach out to me directly at ryjael1@gmail.com if you discover any typos or bugs.

I would like to give a huge shoutout to the following beta-testers.

If you would like to upload or stream video footage of the game, it would be an honor and you are welcome to do so, but please do the following.

As SMOK: Legend of the Laid-Back Heroes (hereinafter to be referred to as "the software") is a personal hobby project, the author makes no guarantee about the execution and content of the software. The author shall not be liable to any loss or damage due to the use of the software.

Came here looking for a time killer only to find RPG gold. I loved the dice mechanic a lot as I haven't really seen anything like it before. I however wished there was a difficult setting but I understand that this game is more story based than anything which you did superb in. In all, its a high quality game, especially knowing it was done in 10 months. Kudos, Mr. Developer. If you were to make a sequel, I'd 100% play it.

After finishing the game I fel like I just finished an anime. This is gonna be my top 3 Hololive Fangames. Thank you for making this

Thank you for your kind words. I'm glad you enjoyed it!

Hey, first of all, I was totally impressed with the quality here - the translations, the jokes, the very complete feeling of the maps and storyline. Also, you're a godsend for having a both languages option (I'm studying to take the JLPT)

However, I'm nearing my 4th hour of the game as I'm writing this, and I've been stuck in the Suisei chase sequence for a while. Can I have a hint? 😅

Small hint: Find and flip the yellow switch first. Then observe the orb's color to figure out the next switch.

you did great on this game, the story, memes,  I'm hoping to see a part 2 of this.

Do I get anything for seeking for sora who's hiding in towns tho? which is also funny too.

Thank you for your kind words. There are no rewards for finding Sora in all towns, but you made a good point. I will consider adding some kind of rewards in a future upgrade.

There will be more update?

I don't like turn-based RPGs usually, but this game is extremely fun and charming and very entertaining. The tone of the writing is perfect for what I would expect out of a Hololive themed RPG, and most of the idols included in this game were utilized in funny and interesting ways.
One of the best Hololive fan games out there! It's even inspired me to try picking up RPG Maker again after a long time of not touching it.

Thank you and I'm glad you enjoyed the game even though it's not your favorite battle mechanics. I had a lot of fun making this game and would highly recommend if you decide to pick up RPG maker again. I haven't looked into this, but there might be plugins for custom battle mechanics out there that suit your style.

Even though I don't usually like turn based RPGs, I absolutely loved this game and it's battle mechanics! I was glued to this game the whole time and I had a blast!
I think after playing both this and Yakuza 7, I'm starting to really get into certain turn-based JRPGs. Thanks for such an incredible game, and I really hope someone in Hololive plays it in the future, cause this is an amazing showing of what both fan made games and RPGMaker games can be.

Thank you for your kind words! I don't have plans to make part 2 at the moment, but I might consider in the future.

yeah after playing this game i agree with the comment sections how can a game made within a year be this good. :D

this RPG games is so AMAZING. i love this game so...can you make another one...pls :D

I refuse to believe you made this alone and within 10 months, its so good!

I REALLY enjoyed this game, the level of polish is very impressive for a one-person fangame, everything felt really well-made on every level, the use of colored text, the presence of difficulty options upon failing minigames or the possibility of skipping them entirely, the simple yet clean level-design makes it so that you never feel lost, the variety in gameplay is quite creative and some of these sequences were very strong points of the game in my opinion (as for the infiltration sequence someone commented on below, I personnally found it fine as the screen is clear most of the time, but I think it could maybe be one section shorter). The polish makes the game very pleasing to play through, and battles never feel like a chore, which is a balance I find pretty hard to strike in RPG maker games. Also I can't believe you translated the entirety of this game's text, including some puns, in another language, that is a ridiculous amount of effort.

The battle system is very original, and it makes you have to think even through random encounters, which I thought was cool, and makes you weigh your options every time, particularly the manipulation of turn order through multi-hit attacks was a lot of fun. The story was neat, and I thought, thematically appropriate for Hololive, and the universe and dialogue were vere very fun and full of references that never feel shoehorned in to the detrimend of the overall story, to the point that I think even someone wholly unfamiliar with Hololive. Everyone having a more-or-less fitting role for their character and mostly appropriate dialogue (which is obviously hard to do with so many characters) was a great touch. The dialogue was fun without being too wordy (I loved the underwater part as well, very creative).

The art is very cute as well, did not expect every Hololive member to be hand-drawn or even some full pieces but it fits with the attention to detail that characterizes the whole game (like the seemingly innocuous presence of normies in every single town that you don't really notice until it becomes relevant, or everyone having new lines at the Inn every time). I definitely did not expect a fangame to be either this long (I personnaly clocked out around 6 and a half hours), or this well-made, and I felt like the amount of effort and love you put into this deserved at least an in-depth review. As a result, the only complaints I would have are very small and subjective, which is that some dungeons and infiltration sequences feel very slightly too long, and that I wish more background elements were interacteable (which I definitely understand requires a lot of work and is just a minor thought). I don't know if there is some kind of payoff for finding ninja Sora I missed, but if there isn't, I think having one would be cool ! I see below you currently don't have any plans for a part 2, which I thought the end was hinting towards, but I can only hope you can find time for it at some point (maybe with some Holostars and staff members added to the mix with the most recent members ?). Either way thank you for making this game ! I might have forgotten some things I wanted to comment on since the game is so rich, so if you are looking for feedback on anything please feel free to ask me !

P.S : Out of curiosity, what are your favorite jokes/references/sequences in the game ?

Favourite sequence: Suisei death game.(She chases you as you try to open the door by pulling levers in a certain colour pattern).

Favourite joke: An idiot drink a bottle of poison and died.("Here lies a certain idiot.")

Favourite reference: After going through the pain of Korone blocking your screen as you navigate your way through the most annoying stealth sequence,you get married to best girl Yagoo.

PS: I speedrun the game in 5 hours on my second completion.

That wedding sequence was great, I thought it was gonna be Korone at first but as it went on it became more and more apparent that it was Yagoo. Not sure I'll have the time to beat that but congrats !

I'm glad you enjoyed the game and thank you so much for the super detailed review & feedback!

Illustrating the Suicopath personality was very fun as the game developer. I purposefully made her super OP, gave her super terrifying dialogues and made her appear out of nowhere. * SPOILER AHEAD* One of my favorite scenes is after the main character escaped Suisei's dungeon, Korone counted the number of hands and there was one extra. Even though I don't usually draw any scenes in the game, I told myself that I ought to draw the scene where everybody freaked out while Suisei calmly put her hand on the hand stack 🤣

Suisei was a blast ! The fact that she has a good move to use with pretty much every dice result makes her so fun to play as well. That scene was truly peak Suisei

Quick question: What was the handicap she mentioned after you died a few times?

I'm not a 100% sure because it might have been another minigame but I think she offers to let you skip the sequence, or if not that, to go easy on you, I haven't tried the option

this game... omg soooo good ... from the graphics and storyline are excellent and funny... Very enjoy playing it. Does it have part 2 or the second game ?

I'm glad you enjoyed the game! I don't have any plans for part 2 yet, but I'll consider if it gains more traction.

This game is a masterpiece...

Not gonna lie,I will play this game again and again if it wasn't for a specific stealth sequence...I have never felt that much anger at a stealth sequence...(I meant the one that forces you to navigate your way through spirits while Korone blocking your screen)

I also enjoy the comedy element in this game.

Before you ask,yes,Save Police is my favourite side character.

I'm glad you enjoyed the game (for the most part)! And thanks for the feedback. I want to see if other players share the same frustration in that section and maybe lower the difficulty accordingly. 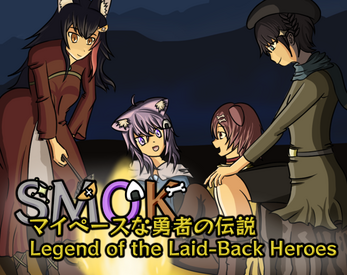